Its a real pleasure we make it known Most smartphone making company have started announcing the soon coming smartphones in the name of LG G7 One and the LG G7 Fit as an addition to its smartphone collections. The newly launched smartphone happens to be announced in a conference.

Having looked at both smartphones, we came to find out that the first phone arrives with Snapdragon 835 chipset as part of the Android One program, While the other one have have an older processor and likely a more affordable price.

Know it that the newly introduced smartphone LG G7 One happens to the the first smartphone in the G-series with the Snapdragon 835, which was said to be found in the older Snapdragon Samsung hoarding all the flagship came with Snapdragon 845.

The smartphone has amazing features that will really keep its users happy when using the smartphone. It has 6.1” QHD+ Full Vision panel, which is also coupled with a notch situated at the top of the smartphone and an extremely high 19.5:9 ratio.

This is really a good one you know? because the cutout hides the proximity sensor, LED notification light, selfie camera, and the earpiece respectively. Please note that there the fingerprint scanner is been located at the back of the smartphone. 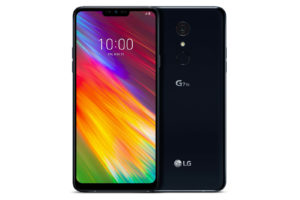 Talking about the RAM of this smartphones, They only have one memory combination – 4 GB RAM and 32 GB Inbuilt memory space which can be said to be also expandable up to 512 GB with the help of a micro SD card.

To all users, Know it that the smartphones runs on Android Oreo 8.1 In terms of camera, it is been packed with a crystal clear camera of 16 MP sensor with f/1.6 aperture. With a front-facing camera of 8 MP with f/1.9 lens, which happens to be the widest angles.

It is important we make it known to you that the newly launched smart device G7 One has a flagship processor and a top-notch screen, LG has Quad DAC, DTS:X, IP68 and MIL-STD 810G compatibility  which is also coupled with a flash Charge of 3.0. Well the battery is quite cool as it packs a whopping  3,000 mAh battery capacity which will see you through your daily activities.

I hope you found this post interesting, kindly stay with us as we do all we can to keep you updated. Do well to share this post with family and friends via the social media platforms. We love you.