Tecno has really been impressive in recent times with their amazing smartphones that have got many people talking. They are really doing all they can to make sure they put smiles on the faces of their respective customers.

The Chinese Based smartphone making company recently launched a smartphone Tecno Pop 2 Pro which has all it takes to make its users happy.

The newly launched smartphone Tecno Pop 2 Pro Android Smartphone, comes with impressive features such as 5.5-inch IPS LCD capacitive touchscreen, 960 x 480 pixels, and it simply runs on Android 8.1 Oreo (Go Edition) with 1GB Of RAM been added to it. 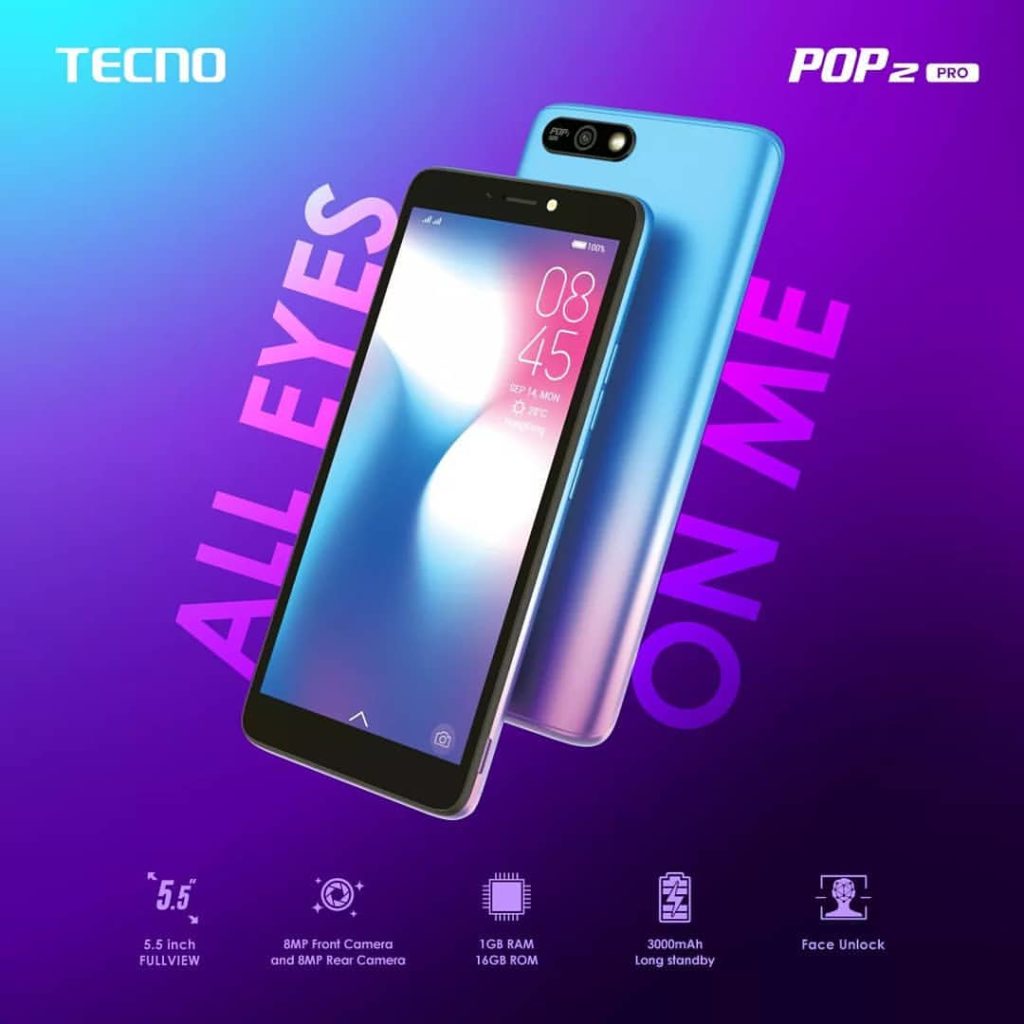 It was not long when the Chinese based smartphone making company launched the Pop 2 but today, which made so many talking considering its wonderful features, now they have come up with an upgraded Tecno Pop 2 Pro which undoubtedly arrives with impressive features.

Tecno Pop 2 Pro Android Smartphone comes with an impressive design such as a slimmer bezel which is said to be enlightening. It also went on to come with thinner bezels and borders been situated at the top and by the sides, with a chin at the bottom.

The newly launched smartphone comes with an amazing 5.5-inch Fullview display 18:9 480p, which is capable of delivering colorful images and video display especially when you are watching movies and the same time going through our pictures.

Good news to all it may concern, the smartphone comes in attractive colors such as Champagne Gold, Midnight Black, City Blue color options, which is also coupled with a fingerprint sensor scanner at the back.

Tecno Pop 2 Pro comes with a wonderful 8-megapixels front facing the camera with LED flash and AI beautification, with also a Face ID Unlock. You can as well take amazing pictures with the smartphone if you really wish to. coming to the Primary camera that stays at the back, it packs 8-megapixels camera with f/2.2 aperture and LED flash for low light photography.

Also, have it at the back of your mind that you can simply take amazing videos with the smartphone. The handset is said to be able to shoot videos at 720p at 30fps per second. Please Note that HDR and AutoFocus features are not excluded.

The Chinese based smartphone making company Tecno Is really good to go in terms of connectivity options. It is been blessed with amazing GSM, WCDMA, EDGE, GPRS, WiFi, and Bluetooth v4.2 which will see you through your time on the internet. Enjoy while it lasts because it as all it takes to keep and make you happy.

Tecno Pop 2 Pro has so many important features you really need in a smartphone. Have it at the back of your mind that the smartphone runs on 4x core MediaTek MT6580 Chipset running at 1.3GHz Octa-core processor. That alone will make the smartphone work in a magnificent way and equally makes it smarter than you can ever imagine.

It will also enhance the phone performance and optimize battery life as well. Know it that it sports a Mali-400MP2 GPU for graphics which will help you be able to play High Profile games. Although, the Memory is quite low considering its low 1GB of RAM.

The Tecno smartphone is been blessed with a whopping 6GB Internal storage, which can be expanded up to 64GB with the help of a MicroSD card. Furthermore, the smartphone happens to runs on the company’s own HiOS 3.3 skin based on Android 8.1 Oreo Go Edition.

Talking about the battery capacity of this device, it is important we let it known to you that Tecno is really trusted worthy in terms of battery. They have been impressive in the past and they intend to maintain that ground.

Tecno Pop 2 Power packs a cool 3050mAh capacity which can last for hours when it is fully charged. You can play your respective games and do all you an because the battery is capable of carrying out the affairs of the device.

I hope you found this post interesting? do well to share this post with family and friends via any of the share media platforms. Stay with us as we do all we can to keep you updated.