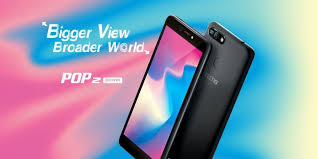 Tecno Pop 2! Well, Know it that Tecno Mobile is no doubt one of the best smartphones manufacturers in the globe with their amazing smartphones that has to go much talking. It is a pleasure we make it known to you that Tecno are really doing all they can to make sure they retain their respective customers no matter what it takes.

Tecno recently launched an amazing smartphone called the Tecno Pop 2 which is said to be an Android Smartphone with 5.5-inch, 8GB ROM, 1GB RAM, 8MP Front Camera with Flash, 5MP Rear Camera with Dual Flash and runs on HiOS based on Android 8.1 (Go edition).

Know it that this smartphone is among the best Tecno phones from the company. Furthermore, Tecno Pop is a mid-range Smartphone with the coolest design and impeccable display.

Without wasting much time, we will be telling you about what the smartphone comes with. Kindly go down through the article in other to know more about the phone.

Tecno Pop 2 is been blessed with a regular Full-Screen display, although the smartphone making company happens to call it its ‘Bigger View’ While introducing the trending 18:9 aspect ratio. The phone is available in Champagne Gold, Midnight Black, City Blue color options, and it lacks a fingerprint sensor scanner at the back.

Good news to all it may concern, the newly launched smartphone Tecno Pop 2 comes with a whopping 5.5-inch  (960 x 480) pixels display touchscreen, which is been said to provide a comfortable screen size display for unlimited entertainment. Coming down to the design, have it at the back of your mind that the handset Ultra-Slim design is portable, along with the 9.35 thickness.

Tecno is really good at making smartphones with a huge camera. Well, tecno pop 2 comes with an 8-megapixels front camera with flash and AI beautification. And the back camera is 5-megapixels rear Camera with dual flash, which is unlike the selfie snapper with a single flash.

Have it in mind that the tecno pop 2 has impressive connectivity options which are said to be amazing. Know it that the Tecno Pop 2 comes with GSM, WCDMA, EDGE, GPRS, WiFi, and Bluetooth v4.2. Give it a try, you will really love to make use of it.

The Chinese based smartphone making company made sure that the Tecno Pop 2 is been powered by an unknown MediaTek SoC but it clocks at 1.3 GHz Quad-Core processor, with an unnamed GPU for graphic performance.

Coming down to inbuilt storage, the smartphone comes with a large 8GB of internal storage, which can also be expanded via the help of a micro SD Card. Fear not because you can store any file you really wish to.

Furthermore, the smartphone comes with 1GB of RAM for multitasking, which is also coupled with Android 8.1 (Go edition), with the company HiOS 3.3 on top.

I really consider the battery life before getting any smartphone. Tecno Pop 2 is really a cool smartphone to make use of because it is been packed with 2400mAh battery capacity. Please have it also in mind that the smartphone in question will be sold at a price tag of under a $100.

I hope you found this post interesitng? do well to get back to us via the comment session if you have any question at all. Stay with us as we do all we can to keep you uopdated.