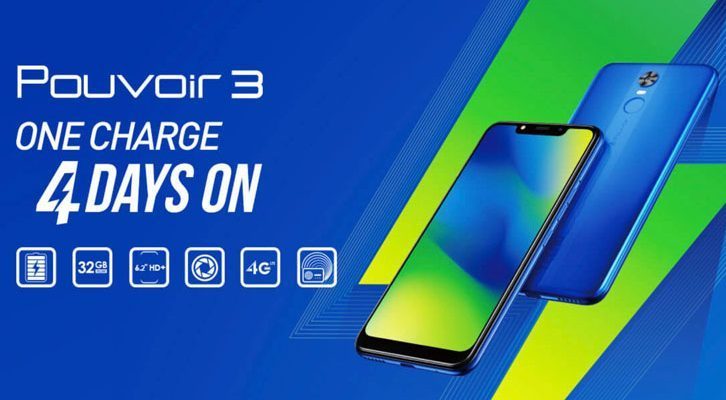 Tecno Pouvoir 3 happens to be another additional smartphone on the Tecno Spark Series. It interested us to let you know that Tecno has been impressive in recent time with their amazing smartphone that has taken many by surprise. The Tecno Spark Series has lots of lovely devices which you can’t afford to miss out on.

Talking about the device, Tecno Pouvoir 3 comes with an interesting plastic body which is suitable for its kind of device.  Trust me, you will love it when being looked at. Tho, the Pouvoir 3 has a nice look to it especially with a cut out notch upfront and small bezels surrounding the screen.

The smartphone comes with large 6.2-inch screen lights up with a color representation making it sweeter to make us of. In terms of colors,  the Tecno Paviour Available colors include City blue, Champagne Gold, and City Blue respectively.

It went further to pack 1500 x 720-pixel resolution which happens to be one of the biggest screen sizes in the Spark Series. This goes well for those game lovers and lots more in as much as you so desire.

Tecno Pouvoir 3 comes with great performance, and that includes a Face Unlock feature, that will allow users to unlock the Pouvoir 3 just by showing your face to it. Furthermore, it goes on to pack FM loudspeaker, 4G LTE network lots more. It runs on HiOS based on Android 8.1 OS out of the box!

Having looked at the phone, we came to find out that  Tecno Pouvoir 3 is been powered by a 1.28 GHz Quad-Core processor, which also supported by a 2GB RAM and a 32GB of inbuilt memory space that is open to expansion up to 128GB with the help of a Micro SD card.

The camera is some of the important reason as well as why people get any smartphone for themselves. The device comes with an eye-catching rear camera of 13MP Primary camera and same at the front-facing camera.

You don’t have to worry at all because this will really go a long way to make sure that satisfy you when taking your amazing pictures anytime, anywhere and any day. You can give it a try!

Tecno Pouvoir 3 comes with an awesome battery capacity which makes it more desiring to many across African and European Nations. Before now, Tecno has been impressive in terms of battery, which was the same reason why it’s been loved and appreciated by so many.

Going straight to the main point, the device comes with a whopping  5, 000mAH battery capacity which is capable of handling the affairs of the phone. It can last up to 4 days talk Hrs when it been fully charged. The categories of people that will love this device battery are those Game Lovers.

For those of you interested in buying this device, have it at the back of your mind that the Tecno Pouvoir 3 will be sold at a price tag of  38,000 Naira In  Nigeria. Furthermore, you can also get them at 13,599 KSh and 640 GH₵ in Kenya and Ghana as well.