It interests us to let you know that the Chinese based smartphone makers Xiaomi has hinted about the soon coming smartphone in the name of Xiaomi Mi Mix 3 Android smartphones which will be coming in less than no time. And most importantly, we will be expecting another 100% bezel-less display from a Chinese company.

It is no doubt that Xiaomi has really established itself as one of the best smartphone makers in the world at large, and also owning one of the biggest phone manufacturing firms in the world.

Please bear it in mind that they also had a history with a lot of devices from the past, which includes amazing smartphones such as Xiaomi Poco F1, Mi Mix 2, and the Mi Mix 2s which were all made to satisfy their respective users.

We discovered that the smartphone making company’s president Lin Bin shared a picture of Mi Mix 3 on Weibo, which did not contain many specifications of the soon coming smartphone. But the Xiaomi Mi Mix 3 packs the same camera specs just like Oppo’s smart device.

It interests us to let you know that the Mi Mix series happens to be the company’s bezel-less lineup devices, the first models arrived with a camera mounted at the bottom display. But now we will be expecting something different with a hidden camera ability. 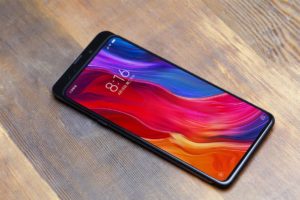 There is no cause for alarm because having looked at the smartphone, we came to find out that there are not many stories you ought to know about the soon coming phone. Just the Xiaomi Mix 3 has a slim chin, OLED display which allows for bending the panel and connectors at the bottom to plug into the motherboard.

And surely it has two cameras at the front and same time support IR face unlock. Many will be asking when this smartphone will be coming, Well based on what we gathered from our reliable source, the smartphone making company’s President, Lin Bin is said to be looking forward to October for the global launch of the Mi Mix 3 Android Smartphone. This is really a good one you know? with each smartphone making company striving to be the best.