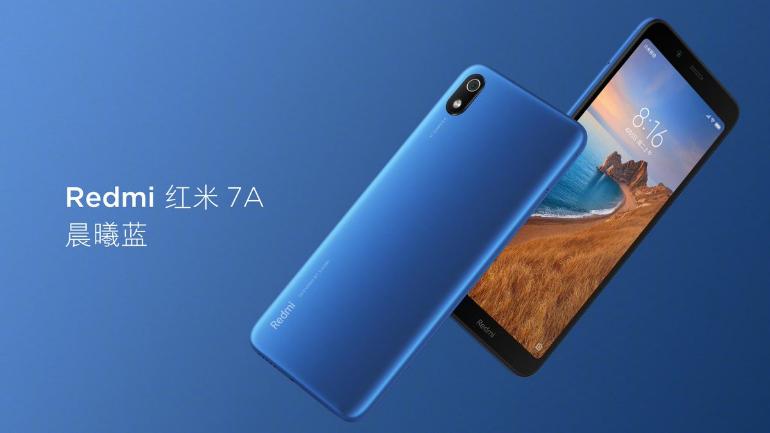 Xiaomi Redmi 7A has been finally launched a new smartphone into their collections phones. As you all know that Xiaomi happens to be one of the best smartphone producing companies across European nations and other parts of the world respectively.

Having looked at the phone, I came to find out that the Redmi 7A has been made official and it comes with lots of interesting features such as a 5.45-inch HD+ display, Qualcomm Snapdragon 439 SoC, a monster battery of 4000mAh battery capacity, and lots more.

Have it at the back of your mind that it happens to be more interesting simply because it comes at a time when the smartphone making company made it known to all that their smartphones will no longer be as cheap as they used to be. Reasons are best known to them.

Xiaomi Redmi 7a happens to be a smartphone that comes with an edge-to-edge screen interrupted by a waterdrop cut-out at the top of the scenery. Furthermore, it has a small chin which is simply built around its base.

The smartphone comes in a 5.45-inch HD (720×1440 pixels) screen coupled with an 18:9 aspect ratio. One thing I really don’t like about the phone is simply just that it does not come with any notch, that alone explains the many bezels located around the screen.

Talking about colors,  Redmi 7A comes with interesting colors such as Blue, Black, and Red colorations, which allows it to enjoy a hydrophobic coating on its rear.

Before I get any smartphone for my self, I really put the battery capacity into consideration. If the battery is not strong enough, I will have little or no interest in buying the device. Xiaomi is really good in terms of battery, they have maintained their Name in making their users happy.

Xiaomi Rdmi 7A comes with a huge monster battery of 4,000mAh battery capacity which is strong enough to handle the affaire of the device. Be informed that the smartphone lasts longer when it is been fully charged. One most interesting face if this battery is simply that it has a fast Charge 10W that comes pre-installed with the smartphone.

The smartphone packs an interesting camera such as a 12MP sensor that controls the execution of images and videos with a supporting 2MP sensor inputs depth information. Coming to the face, it has a whopping 16MP camera coupled with  AI-enabled suitable for smart pictures.

Talking about performance, the newly launched smartphone has lots of great performance. Xiaomi Redmi 7A is been powered by an Octa-Core Snapdragon 439 Mobile, it also comes with Adreno 505 GPU, which helps users to play any Huge computer game of their choice.

The phone comes in two respective variants such as 2GB of RAM with 16GB storage and 3GB RAM with 32GB storage, which can all be expanded up to 256GB with help of a micro SD Card.

This goes to all those who really wish to have this smartphone for themselves, the price of this smart device will be made known officially on May 28th, and also with the company’s flagship phone, Redmi K20. Until then, we will do all we can to keep you updated.

Xiaomi Redmi 7A has all you really need in a smartphone considering the features and the specs you are meant to enjoy. The above information tells us more about the smartphone.