It is good news to let you know that the well-known smartphone makers have Finally unveiled the slightly upgraded version of the Infinix Note 5, going by the nameInfinix Note 5 Pro Stylus Android Smartphone. It is a good thing we make it known to you that one main major difference is the availability of a “Stylus’ pen with 4096 level pressure. 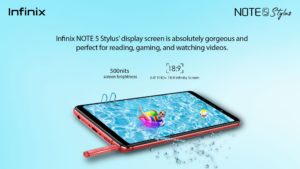 Having gone through this smartphone we came to find out that the new Infinix Note 5 PRO Stylus happens to be a more portable smartphone than the Note 4 or Note 4 Pro. coming to the camera aspects of this smartphone, it is said to be promoted with AI (Artificial Intelligent) features, which supports the front and back cameras.

Talking about the Infinix Note 5 Pro with Stylus pen, the newly launched smartphone comes with a stylus pen. And to the best of my knowledge, we all know that the S-pen is Samsung Note’s series signature seen in the Samsung Galaxy Note 9, which is now seen in the newer specs and features, thereby making it to be frequently added to the Galaxy Note smartphones. Please also bear it in mind that the Note 5 Stylus is the company’s second phone with Stylus Pen.

Must Read:  List of All Infinix Hot Series Detailed Reviews

It is a pleasure we make it known to you all that the newly launched smartphone’s camera is been mounted horizontally, with the fingerprint sensor been placed before the company’s logo. On the other hand, you can find the camera been vertically mounted just the same on the Note 5 Pro Stylus and the fingerprint sensor not excluded.

Good news to you all, the newly launched smartphone Note 5 packs a whopping 12-megapixels camera with f/2.0 aperture and 1.25um pixel size, while the selfie snapper remains at 16-megapixels with support for low-light photos. Based on what’s on the ground, many infinix users are hoping that the Note 5 Pro will arrive with dual cameras but the company decided to increase the sensor to 16-megapixels f1.8 aperture with a flashlight.

Coming down to the processor, bear it in mind that they are both similar, although both phones are been powered by a 64-bit Octa-core 2.0 GHz Cortex-A53, on a  MediaTek Helio P23 MT6763T chipset. While the ARM Mali-G71 770MHz handles the graphics performance without any form of troubles. 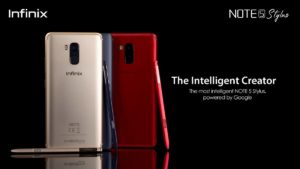 For all interested persons, have it at the back of your mind that the Infinix Mobility will have to request a small amount of money from you for the infinix Note 5 Pro for advanced specs and features. Coming down to the price of this smartphone, the official price has not yet been revealed.

But we do hope it will not be more than 300$ and now, the Infinix Note 5 stylus pre-order price has commenced at N3000 and will end on the 15th of September 2018. Make haste when the sun shines because Night will come when no man can work. Hope you liked that?!